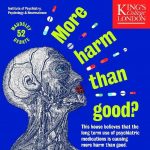 A lively debate hosted at the Institute of Psychiatry, King’s College, London.

The debate was well attended, with a count of those for and against the motion taken before the debate. Then having heard the arguments of the experts, the passionate audience questioned the panel. At the end of the debate a second count, for and against the motion was taken and the argument that psychiatric medications cause more harm than good, was carried by a substantial majority.

We are delighted that there is an ever growing support for our values at Chy-Sawel. Awareness is growing and increasing numbers of scientific studies and professionals support our position.

We look forward to bringing you more news in the near future.

Xenca offers a range of health and well-being products that complement the Chy Sawel ethos.